Posted on October 11, 2016 by queenscountyheritage

With the 100th anniversary of World War I being commemorated around the world, our ancestors with a military background sometimes their presence felt during the annual ghost walk.  Over the centuries the people of Queens County have been asked to make wartime sacrifices and they have always answered the call for crown and country.  In honour of all those who have served, fought, lost their lives or returned to tell their story, now and again soldiers and civilians, and their families, each of whom was intimately involved or had a brush with military conflict over the centuries, make a ghostly appearance in Queens County.

Some ghost stories are well known to us, others always need a little work.  But the research always turns up some interesting things that get our attention. 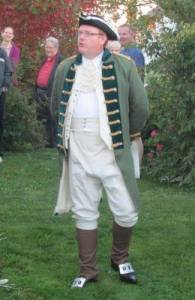 Bruce Thomson as the most pious, genial, useful, indulgent, affectionate, generous, gracious, fine, genteel, universally respected, intellectually superior, dignified and in death much regretted James Peters, Loyalist founder of the village of Gagetown greets visitors at the Tilley House in 2014

Did you know the first wife of the grandfather of one of Gagetown’s most prominent citizens ran away with a pirate?  That’s right.  The family of Loyalist James Peters largely ignored the story that the wife of his grandfather, Dr. Charles Peters, ran off with a pirate soon after they migrated to New York from England about 1700.  By 1702, the wife, Mary Kate, took up with the already married Giles Shelley, who was a close friend of Captain Kidd.  Shelley even provided for Mrs. Peters in his will, giving her 50 pounds per year “free from the control of her husband.”  The row eventually made it to court when Shelley’s scorned wife sued.  By 1710 Mary Kate had made a timely exit by dying, allowing her long suffering husband, Dr. Peters, to marry Mary Hewlett and found the branch of the family that descends to us.

Did you know that specialty motor boats and yachts were manufactured in Gagetown in the early 20th century?  Uh-huh, you bet.  Lieutenant Allen Otty, the older brother of Marianne Grey Otty, is well known to have written dozens of letters from the front during World War I and tragically lost his life at Passchendaele in 1917.  But before he went off to war in 1915, Allen Otty was a boat builder.  Photographs in the Otty Collection at the New Brunswick Museum show the interior and exterior of the boat shop – a large long building bordering present day Babbit Street, behind the Otty House.  Part of the shop remains as a private home.  The photos show Otty at work and others show completed boats: the Thistle, the Gladys, the Aloha.  A postcard, c. 1910, shows a team of horses pulling a large boat down to the wharf.  Undoubtedly this was one of Otty’s vessels as well. 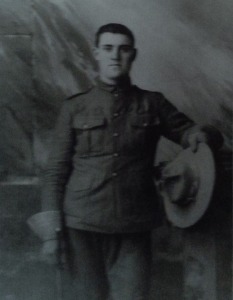 Did you know that a Gagetown boy served in the South African War and World War I?  Daniel Stephen Hayden was born 25 December 1879, the son of Irishman Francis and Margaret Hayden.  Young Dan signed up to serve with the Canadian Dragoons during the Boer War with the rank of Private.  A photo in the QC Heritage collection shows a confident young soldier ready for adventure.  After his return from South Africa and the death of his father in 1904, Dan Hayden traveled west and was present in Edmonton the day Alberta became a province in 1905 – probably because his fellow Gagetowners, George Hedley Vicars Bulyea and his wife Annie Blanche Babbit, were the new Lieutenant-Governor and lady.  Hayden worked freight on the railroad and answered the call for duty once again during World War I, achieving the rank of Sergeant.  According to his 1916 attestation papers, he stood 5 feet 9 inches and had a clear complexion with hazel eyes and black hair.  Hayden survived the second conflict, married twice in the 1920s, had a family, was active in politics and community affairs in High Prairie, Alberta, and was a life-long member of the Royal Canadian Legion.  In 1960 he returned to Gagetown for a visit after an absence of 52 years, and died two years later in 1962.

Keep an eye out for these military ghosts.  For more information drop us a line at info@queenscountyheritage.com .

This entry was posted in Remember when?. Bookmark the permalink.