Posted on December 6, 2012 by queenscountyheritage

Albert Gallatin Hoit was born in Sandwich, New Hampshire in 1809.  Largely self-taught, he appears to have been painting at a very young age.  Following his graduation from Dartmouth College in 1829, Hoit worked in Maine charging between $30-50 per head ($1200 in 2012).  In the 1840s he set up a studio in Boston, exhibited regularly at the Boston Athenaeum and was a founder of the Boston Art Association.  One of the leading portraitists of his day, notable clients included presidents and statesmen in both the United States and Canada, including President William Henry Harrison and Secretary of State Daniel Webster.  His works are now in the collections of the National Gallery of Canada, the New Brunswick Museum, Harvard, the Smithsonian, the US National Portrait Gallery and several other museums and galleries in the United States.  Hoit died in Boston at the age of 47 in 1856. 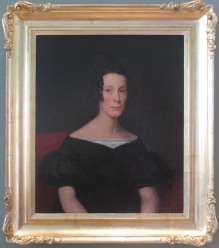 In 1836 Hoit traveled to Fredericton and was obviously pleased with the opportunity for business as he returned to New Brunswick in 1837-1839 and again in 1848-1849, painting portraits in Fredericton, Saint John, Miramichi and Halifax.  During his 1830s visit Hoit received a commission of significance to Queens County, the portraits of Harriet Maria Millidge and her husband, Hugh Johnston, Jr.  Although primarily residents of Saint John, the Johnstons were prominent Queens County landowners , including Roseneath (the Loomcrofters).  When looking for a skilled artist for their portraits, it was natural for the Johnstons to choose the most fashionable and famous talent in the province.  Only the portrait of Mrs. Johnston remains, having survived the evacuation during the 1877 Saint John fire only to be stolen and then recovered.  In the portrait of Harriet Millidge, the skill and talent of Hoit is obvious:  between the fine costume, red chair, and the ringlets in her hair, the rosy-cheeked charm and elegance of Mrs. Johnston are perfectly clear.

The portrait unfortunately is unsigned and undated, however the family was always very clear about the subject, the great grandmother of the donor, Mrs. Marion Hubbard Logie.  The artist was authenticated as AG Hoit a number of years ago by art experts.  Our primary wish is that the mate, Mr. Johnston, would surface somewhere in New Brunswick so that the pair could be seen together once again.

The portrait was restored in the late 1990s and as part of Art Under the Influence, the original frame was repaired and re-gilded as well.  Most of the plaster decoration which had fallen off or gone missing was meticulous recreated by the hands of Sean Driscoll, a private contractor with great knowledge of museum objects.  Now, for the first time in almost 20 years, Harriet and her original frame are reunited.

For more information about AG Hoit or to see Harriet in person, contact us at info@queenscountyheritage.com.

This entry was posted in Did you know?. Bookmark the permalink.